You would be surprised at what goes on behind the scenes by a minority of members to ensure that, not only masonic meetings, but festive boards go ahead on time and to plan without a hitch. This months meeting was no exception, and to the few who conducted tasks way beyond what is asked, congratulations and thank you. To those who participated fully in their masonic duties as officers of the lodge also many thanks from the

brethren. Our Junior Warden Bro. Ian Salthouse faced a full barrage of fire in his first meeting in the role of ostensible steward and survived the onslaught with dignity, well done Ian, it really is a major learning curve picking up the duties of Junior Warden, and just when you are comfortable and have the job sorted you have to hand it all over. Enjoy your year as ostensible steward and revel in the duties you have under your control, believe me you and your stewards are a popular bunch at the social board. It was pleasing to hear a well thought out toast to the visiting brethren and including the five gentleman non masons in the toast was also the right thing to do. Mr Ian Duxbury who responded on behalf of the non masonic guests commented “it was the highlite of his evening and could he come again next year”. Incidently, our gentlemen guests did have a good evening with us and it would be remiss if we didn’t ask the question of every one of them if they had any interest in Freemasonry and would they like to join our Lodge 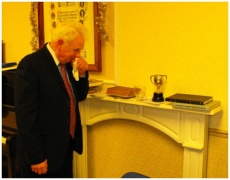 John Hudson, our long serving Secretary came in for a big surprise on the evening. Spotting something strange over by the piano covered in a table-cloth he enquired as to what it was and was promptly told not to be so nosy and get on with his dinner.  Now John is a very busy mason and serving secretary in many lodges, and it comes as no surprise that he often misplaced or forgot the odd set of summons or important voting slip over the years, this became something of a joke within the lodge especially when his best excuse was that he had left them on the fireplace at home. So during the evenings festivities we managed to provoke 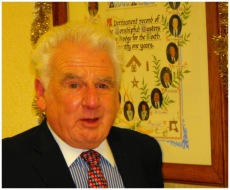 John into responding to temptation and say that he had forgotten something and that it would probably be on his Fireplace, at that moment Peter Christie jumped up and swiftly unveiled a Fireplace surround from beneath the table-cloth and announced that John would no longer have to worry as his Fireplace was now at the lodge and there was no excuse to forget important documents any longer.  John couldn’t believe his eyes.

be having a great time conversing with each other and enjoying the complementary wine, provided by Bro Pickering and the social committee, along with the splendid Port brought over from Portugal by W.Bro Larry Riches and the Junior Wardens Whisky after the Queens toast, so for anyone reading this who didn’t attend, we all had a rather good masonic evening.