Quite a few of Pendle Lodges officers are, as many of you know, involved in the 1759 ancient ritual demonstration team. The final dress rehearsal was on Friday 13th, how ominous a date in masonic history is that, and the last nine months have been one of trial and tribulation. The Pendle Lodge members involved are John Hudson, Jim McNally, Bryon Lingard, Bob Summers, Mark Barlow, Ian Salthouse, Kevin Pickering, and one of the original demonstration team members Steve Jansen. The rest of the players coming from the district are Tony Medley, Graham Smith, Eddie Forkgen, Jim Whittaker, Harvey Capstick, Graeme Wilkinson, Glyn Hughes, Godfrey Ayre, and Ian McDonald.

It started almost nine months ago with a conversation around a bar, as many good ideas do, and a commitment to take things further. The original script and ceremony were put together by Stuart Jackson many years ago, and it was thought that the majority of props, regalia and wigs probably still existed in the bowels of Burnley Masonic Hall. It turned out that indeed they did, but in a sad sorry state I’m afraid. Most of the wigs and aprons having to be replaced with new. 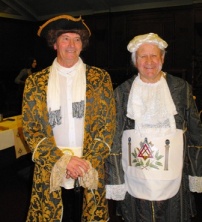 The new team was put together by John Hudson and quite quickly a nucleus of volunteers appeared out of the woodwork and started getting themselves organised into a coherent team. It really was quite amazing how much preparation Stuart Jackson and the original cast had  done to create a fictitious lodge with its own apron design, tracing board, working tools, candle sticks, gavels and regalia, as well as characters from a typical 18th century town. Plenty of scope for the new boys to work with and develop further.

Practices started in earnest at Colne Masonic Hall, as this was though to be the location of the first performance, however after several read through’s  of the script, and once the lodge room had been set up according to drawings and plans of the old team, it soon became apparent that Colne Lodge room wouldn’t be big enough. So plans to make changes were made.

The learning of ritual and ceremony was very familiar to the new bunch of volunteers making up the cast of performers, but it was unfamiliar words and timings that threw most of us. It took many weeks before an actual practice took place without ritual books, and even then the outcome was pretty dismal. However our DC Glyn Hughes persevered and almost to the final practice it was ritual that was causing us the most worry. By far the hardest part to pick up were the so-called “ad lib” comments and jibes that are a large part of the performance. Interestingly enough, most of the ceremonial is very familiar, with one or two sections of it answering some of the basic questions of our current ritual and why certain parts of the initiation ceremony are why they are today. You will know what I mean if you see the performance.

Last nights final dress rehearsal was an amazing evening with the most critical of audiences, our ladies. The cast had, over the past 9 months been working on their outfits, with many of them spending far too much money and getting carried away with authenticity. Most of the cast are now experts in 18th Century attire and each outfit would pass muster in any BBC period production. Our candidate for the evening even had his shirt specially hand-made in Thailand.

The performance at Pendleside Lodge, if last nights dress rehearsal was anything to go by, will be spectacular, and missing the premier performance would be foolhardy. I believe the current audience for the evening at Burnley Masonic Hall will be in excess of 96 brethren, with almost the same number dinning afterwards.

The cast plan to visit many lodges during the festival period and make as much money as possible for the fund. Do what you can to support them, remembering that all of the costumes and many of the props and aprons have been purchased by the cast and in most cases have cost considerable sums of money and that their time is being given freely for the enjoyment, and if you consider, education, of all the audience.

Its been a lot of fun so far.