If you don’t count the members of Pendle Lodge who are already officers in Queens Jubilee, of which there are three, then the official visitor tally was 8. A very respectable turnout and one which we should be aiming for at our next visit to Marsden within Pennine Valley.

Surprisingly it was announced that Queens Jubilee was within 3 days of its 125th Anniversary and the event had almost slipped past without anyone noticing. Keith Schofield, Grand Officer and longest-serving member of Queens Jubilee, brought the anniversary to the attention of its members and visitors whilst standing in as Junior Warden.

The demonstration passing ceremony went well enough, with everyone playing their part. Senior Deacon Godfrey Ayre played several parts, most of them not his own, with  stand in candidate Mark Barlow, somehow keeping his cool and delivering his lines without direction. All in all an enjoyable evening of masonic workings. 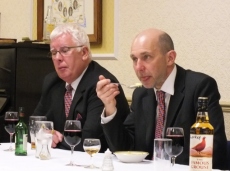 The social board was well attended with a plentiful supply of good food and drinks from the bar. WM Jim McNally, never missing an opportunity, seized the day and issuing all the brethren with a large whisky proposed a toast to Queens Jubilee Lodge on its 125th anniversary. The brethren all stood and honoured what was a remarkable achievement.

The toast to the visiting brethren was also proposed by Keith Schofield with the response from, for the very first time, and after already working his socks off, Mark Barlow. He acquitted himself very well and responded on behalf of the visitors in style. Well done Mark,  and be prepared Kevin.