James Bradley received a Private Lodge Certificate from the Colne Lodge of Freemasons No. 276, on the 24th June 1762 at the Hole in the Wall, Market Street, Colne, Lancashire

James Bradley’s Private Lodge Certificate pre-dates the founding of the Grand Chapter by the Grand Master of the premier Grand Lodge, Cadwallader, 9th Lord Blayney, on 11 June 1766, who immediately became its First Principal.
Lord Blayney issued the two oldest chapter warrents in the country, one to Nativity Chapter in Burnley and the other to Cana Chapter in Colne. The two chapters celebrate their 250 years on the 12th May 2019.

It is not know when Freemasonry was first worked in the small Lancashire town of Colne, however, in the minutes of the lodge it records the funeral of Bro. John Shackleton a member of the lodge upwards of 50 years. This seems to indicate that the lodge must have been working some sort of Freemasonry in 1732. The fact that the lodge has in its position two ancient Masonic charges, one written in the 1600’s the other written at the start of the 1700’s. All seem to indicate that the lodge has a history much longer than its written records, which only go back to 1758. 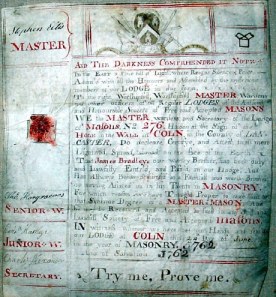 This hand-painted certificate is now housed with the Masonic Library in London for safe keeping. It is claimed by the Library that it is the fifth Oldest Lodge Certificate in existence. The Library’s description of the certificate, “that Bro, Bradley hath taken the 1st, 2nd, and 3rd Degrees of Masonry”. The actual wording is as follows:(Royal Lancashire Lodge).

“James Bradley, our worthy Brother, has been duly and Lawfully Entr’d, and Pas’d in our Llodge, And Has always Behaved himself as a faithful and worthy Brother: he having Afisted us in his Taents in Masonry. For which reason we have Thought Proper to raise him to that Syolmne Degree of a Master Mason: he may be Received and Acclaimed as fuch in any juft and Lawfull Society of Free and Accepted Mafons.”

The certificate is signed by Stephen Ellis, Master of the Lodge, Tho [ma]s Hargreaves Senior Warden; Chris[tophe]r Hartley, Junior Warden and Charles Alexander, Secretary of the Lodge.

This slight difference may indicate that Colne’s “Syolmne Degree of a Master Mason”, may not have been the same as the new degree formulated Desaguliers, in 1724 and based on the legend of Hiram Abif. As Lawrence Dermott put it, the new 3rd Degree was the work of Rev. Dr. John Theophilus Desaguliers the Past Grand Master of the Premier Grand Lodge and seven of his friends.

It was Desagulier, who laid it down that ancient Masonry consisted of three degree and no more, but who in 1732 introduced three noblemen into the Super Excellent Chapter at the Duke of Montagu’s residence.

Dr Fifield Dassigny In his Irish Masonic sketches of 1749, held the view that no brethren were entitled to receive the Royal Arch Degree until, he made the “proper application, and are received in due formality; and … it is an organised body of men who had passed the Chair, and given undeniable proofs of their skill”.

Bro. Dashwood also queried whether as early as the late 1730’s, it was a requirement of having been in a Craft Chair to progress into the Royal Arch. His findings concluded that it was.

Although Desagulier’s ‘third degree’ was derived in 1724, it was not until 1750 before it started to become established in Premier Grand Lodges, and Fellowcrafts could still take any office and not all masons took the trouble to do the new 3rd step.

The Colne Lodge started to keep written records in 1760 and these were of the very basic and did not include information as to what ceremonies were being worked.

The records in the lodge’s ‘forfitt’s book’, includes the Lodge ‘Bye-Laws’ together with the names of 33 Brethren as of 27th March 1760.

The Colne Lodge had to wait until 4th February 1762 before it received its warrant from the new Provincial Grand Master of the Moderns for Lancashire. The founding Master was Lawrence Whittaker, a Gentleman of Chambers Hill, and one of the Constables from Marsden, John Hargreaves a surgeon of Greenfield House and James Ellis a tailor were the Wardens. Other founders included Charles Alexander a barber and a professional writer and scribe and Thomas Hargreaves a carpenter, who became the Master of the Lodge in 1768 and the First Principal of Cana Chapter in 1769.

James Bradley is not mentioned as a member in the ‘forfitt’s book’ of 1760, so one can presume he joined the Lodge after the members list was compiled, and had made the required progress to be raised to that Sublime Degree of a Master Mason by 24th June 1762.

“About the year 1762 we solicited Mr. Smith, Prov. G. Master for Lancashire

For his protection and he granted us a Warrant and we expected Mr. Smith or some other provincial for our County Palantine would a pay’d us a visit before now in order to try our proficiency in the Craft and enlarge our Instruction – we are pretty well satisfied with the progress we have made in the first and 2nd Steps, but we are at a loss to know how we should attain proficient Instruction in the third Step which is particular reason why we have not obeyed the request of the Letters we have received, the only Third Step we ever received has since been Transcribed and published in a Pamphlet called T – but as things of that kind in not Countenanced with us, we did not know whether to confied in it or not.”

It seems strange that, just 12 months after Thomas Hargreaves the Master of Royal Lancashire, had written his critical letter to the Grand Sectary, that he received a warrant to from Grand Chapter on 13th January 1769, to form ‘the Cana Lodge or the Chapter of the First Miracle No 5., meeting at the Hole in the Wall, Market Street, Colne, Lancashire.

The Grand Chapter of the Moderns was only founded in 1766, and it took three years before the first Chapter warrants were issued. Cana Chapter was one of the first four warrants to be issued on 13th January 1769. Cana Chapter No.5 then had 21 founding members, all of whom had passed the chair and received the arch step in the Royal Lancashire Lodge.

Strange but interesting, John Hartley an Overseer for the poor, received ‘ye arch step’ in the Royal Lancashire Lodge – 4 years after Cana Chapter was warranted.

Let us take another look at the wording on the James Bradley Certificate, under the heading: AND THE DARKNESS COMPREHENDED IT NOT; the text reads – “In the EAST a Place full of Light, where Reigns Silence & Peace” Adorn with all the Honour and Assembled by the myfferions members of our LODGE in due form. To the right Worlhipfull, MASTER, Wardens and other officers of all Regular LODGES of the Antient and Honourable Society of Free and Accepted MASONS. WE the MASTER, wardens and Secretary of the Lodge of the Lodge of Mafons No. 276, Holden at the Sign of the HOLE in the WALL in COLN. In the Couny of LANCASTER. Do decleare Certifye, and Atteft to all men Lightned, Spread abroad, on the face of the Earth that James Bradley, our worthy Brother, has been duly and Lawfully Lawfully Entr’d, and Pas’d in our Llodge, And Has always Behaved himself as a faithful and worthy Brother: he having Afisted us in his Taents in Masonry. For which reason we have Thought Proper to raise him to that Syolmne Degree of a Master Mason: he may be Received and Accemed as fuch in any juft and Lawfull Society of Free and Accepted Mafons.” And he may be Received and Acceppted as fueff any Juft and Lawfull Society of Free and Accepted mafons, IN witnefs at COLN, this 24th Day of June Ano of Salvation 1772

The first thing we note is that the heading is from St. John’s Gospel – Chapter 1 v 5. “and the darkness comprehended it not”. Although the preceding verses 1-5 include the original words that were written on the scroll found by the sojourners in the vault in the Royal Arch Ceremony:

It is thought that the ‘Hole i’th Wall Inn’, Colne, Lancashire was built in 1636 and still retains its 17th/18th century character. It originally started trading, not as a pub, but as one of the very first off-licences, serving beer, which was brewed on the premises, and sold through what was literally a hole in the wall, hence the name.

An ancient draw-well use to be situated opposite the Inn. The well was arched over in 1801 and now lies beneath the road. Once used by the Royal Mail coaches, the inn sits at the highest point in Colne, some 626 feet above sea level.

It was much frequented by the leading manufacturers of Colne in the early 18th and 19th century. The inn was the first know home of the oldest Masonic Lodge in Colne and is the oldest surviving meeting place for Royal Arch Freemasons in the World.

On examining all the information above, I am led to the conclusion that the James Bradley’s “Syolmne Degree of a Master Mason”, in his Colne Lodge No. 276 in 1772, was most likely to have been “the Sublime Degree of a Royal Arch Mason”. This would have been in keeping with the working of the old York Grand Lodge, which had been fairly prevalent in Yorkshire and East Lancashire in the 1760’s.

The Colne lodge has further linkages to old York Grand Lodge and Ancient ceremonies as it continued to confer the Mark on candidates in the Lodge right up to 1858 and the Lodge was an early applicant to apply for a warrant for its Knight Templar Encampment in 1805.