The Lancaster / Pendle Lodge visit has been taking place for over ten years, with the very first being made by Brian Ingham, followed in later years by Roberts Davies and Harry Lord. The 2013 Ladies Festival took place on Monday 21st May followed by a fun packed week of Masonic Meetings and visits to local points of interest. Four couples from Pendle Lodge made the trip over to beautiful Cascais Portugal for the Festival and to spend some well-earned leisure time in the sunshine.

Located right on the central western Portuguese coast just a short drive from Lisbon, Cascais Portugal is steeped in history and offers some of the most exquisite natural and architectural sites in the country. Mile after mile of rugged golden coastline wend their way north-west from Lisbon, out of the Tagus estuary and up towards Cascais and the most westerly point on mainland Europe. Here, history, archaeology, architecture and natural beauty combine to create a compelling and enduring centre that has enjoyed centuries of popularity. 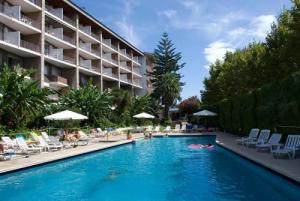 Lancaster Lodge conduct their masonic meetings in one of the conference rooms in the Citadela hotel, it means having to set up the lodge or chapter room on each and every occasion  but it certainly makes hosting the Ladies Festival an easy choice of venue. The Hotel is very comfortable with friendly staff, swimming pool  and a well stocked bar, nothing was too much trouble. The Ladies Evening is typical of such gatherings with the Ladies dressing up for the occasion and the gentlemen all wearing a Craft blue bow tie. Dining in Portugal is spectacular and the menu for the evening nothing but superb. Wine is a long tradition in the country and plenty of their finest quality was consumed and enjoyed by the 80+ members and ladies in attendance. The night was a long one with dancing and entertainment right into the small hours.

Lancaster Lodge organised a tour for those interested to several places around the Cascais Lisbon area, followed by a meal at a favorite Thai restaurant to close the day.  The first stop was to Mafra Palace for a couple of hours, then onto Obidos for lunch and a further stop, followed by a visit to Buddha Eden and finally our evening meal.

Mafra Palace – Dating back to the early 18th century, Mafra National Palace is Portugal’s most important baroque monument, occupying an area of roughly 40,000 square meters. Its 2 carillons and 6 organs make the church unique in the whole world and its library is considered to be the most beautiful in Portugal, with more than 38,000 volumes. This palace was the official summer residence of the Portuguese royal family until 1910, when Portugal was proclaimed a republic. We had two hours to explore the palace and its grounds. The scale of the palace is something to behold with huge grand rooms and corridors throughout the palace. Each room is decorated and furnished throughout and the entire experience is one of splendor and magnificence. It is said that the gold supply from Brazil was the main source of funding for the building, but alas its construction almost bankrupt the country. It was never used as a permanent royal residence but only as overly large hunting lodge for the royalty.

The Library was by far the most impressive room to visit with its 38,000 books on display running the entire length of the room on two floors.  Two hours really wasn’t enough if you wanted to experience the palace in its entirety and a future visit for a couple of days would be needed for those with an interest in history or its architecture. 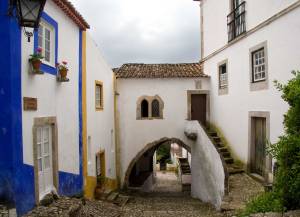 Obidos – The magnificent medieval walled town of Obidos is known as the ‘Town of Queens’ because of a tradition in which kings used to offer the place to their wives, on the day we visited our wives were blissfully unaware of the tradition, thankfully, otherwise a few bids for ownership may have become apparent  The town boasts some lovely churches. In days gone by these were built when queens gave birth to a child. The graceful castle is now a Pousada and perhaps the most romantic of all of the Pousadas de Portugal. The town is stunning, full of well-preserved white houses with Manueline porticos and flower-laden window boxes; sinuous streets with romantic recesses; arcades and small squares.  The perimeter of the castle walls, from which you can see the aqueduct, is accessible from many parts of the town and can be walked throughout its entire length. There is no safety barrier along the edge so extra care had to be observed if you were brave enough. Within the walls, numerous bars offer you a taste of ginjinha, a traditional liqueur, served in a chocolate cup, which the ladies seemed to prefer. The local cuisine took centre stage for lunch, with grilled sardines, breads, olives and other delicacies making it to the table. Once again the magnificent wine was enjoyed by many of the group. The sun shone splendidly and made the Obidos visit a most memorable one for all of us.

Buddha Eden – A short coach journey brought us to our next destination which was a real eye opener. The Buddha Eden Garden is an area of about 35 hectares designed and conceived by Comendador José Berardo in response to the destruction of the Giant Bamyan Buddhas, sculpted in the rocks of the valley of Bamyan in central Afghanistan and which had for centuries been a cultural and spiritual reference. Comendador Berardo was profoundly shocked by the attitude of the Taliban Government, which intentionally destroyed these unique monuments of World Heritage, considered acts of cultural barbarism which attempted to erase from memory the art of the late Gandhara period.

In 2001, in response to this loss he initiated another of his dreams, the creation of an extensive oriental garden in honor of those colossal Buddhas. It is intended that the Buddha Eden Garden be a place of reconciliation. Without any religious tendency, with open doors, to all people of all religion, ethnicity, nationality, sex, age, and sociocultural background, inviting all to come together, to communicate and meditate, to rest and rediscover happiness. The gardens really did bring a sense of serenity and peace to the by now weary traveler but the impressive statues spread around the gardens enticed us all to travel further and discover the wide range of religious and ancient reproductions from around the world. It did seem a bit odd having such a mixture of cultures all in one place from a Buddha to Terracotta Warriors, but I suppose the Internet makes all this possible on-screen anyhow. It was all very well crafted and well worth the visit.

Dinner was booked at the favored Supatra Thai restaurant which was only a few minutes from the Buddha Eden Gardens and was very welcomed after the full day.

The work that goes into preparing such a spectacular week of events is enormous and a big thank you must go to those involved in delivering its success. Larry Riches was always at the forefront of every activity but I’m sure he had a team of volunteers behind him; such was the success of the masonic visits and activities.

Thank you from Pendle Lodge