The visit to Buckley Lodge turned into a few days away in Chester with the ladies. Seeing as the lodge meeting was to be held on the Friday evening, and that Chester City Centre was on the doorstep, it was not a difficult decision. The difficult part was the logistics of arriving at 6:30 pm for the Lodge meeting, and the ladies arriving at the hotel after finishing work. It resulted in two cars making the trip, and only one arriving back home under its own steam, but that’s another story.

Buckley Lodge meet in the small town of Buckley in North Wales close to the town of Mold. The Lodge was formed in 1967 and they have a healthy members list typical of the Province of North Wales. The Lodge room is situated above a  rather good Indian Restaurant on the edge of town. The journey was quite uneventful except for the unwelcome Bank Holiday traffic making their way in North Wales. the traffic wasn’t too bad and we made it with ten minuets to spare. 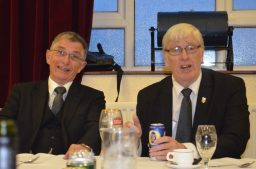 Not knowing what the order of the evening entailed we were very surprised to find it was an Olde England Night and that 78 members and visitors were in attendance. The lodge business featured a lecture entitled “Class Lodges Ancient and Modern” given by W.Bro Mike Watkin, a recent visitor to Pendle Lodge and Wycoller Mark Lodge in Colne. It was surprising to find that many Lodges specialised in  their memberships and  Mike Watkin went on the describe and explain many of the specialist lodges ranging from Undertakers Lodges to Brewers and Bakers Lodges, with every other type of profession included along the way.

We spotted several differences in the ritual aspect of the proceedings, and its always interesting to see such things and to have the opportunity to chat about them in the social board. The Olde England Night fayre was excellent with the main course being half a ham hock the size of a rugby ball. It really caused a stir with many comments of surprise. A major raffle took place towards the end of the festivities with over a dozen prizes up for grabs resulting in a goodly sum being raised for charity.

The evening closed with everyone in high spirits and full of Olde England Fayre. It doesn’t get much better. Our trip back to the Hotel turned into a bit of an ordeal as the car in which we were travelling broke down around half way. Thankfully the Ladies came to our rescue and saved the day. The car in question was recovered by the AA and returned home on the Sunday morning.

The following day we all had a great time in Chester shopping and exploring the Cathedral and Roman sites around the town. There was a huge amount to see and we all decided that another visit would be in order to fully explore the Cathedral site alone. They offered a behind the scenes tour of the Cathedral which included a climb of 287 steps up to the top of the bell tower. Unfortunately we didn’t have time for this but could imagine the views from the top.

Thanks must go to W.Bro Dave Turvey Director of Ceremonies for his hospitality on both Friday evening at the Lodge and Saturday night at the Chinese Restaurant. If anyone would like to make a visit over to North Wales later in the season then let me know. You wont be disappointed.