Our Cascias visit for 2014 was once again a fantastic week-long affair of Masonic meetings, festivities, visits to places of interest, and of course the local food and wine. The weather played up a bit on a couple of days but it didn’t dampen the spirits of the UK contingent one bit. 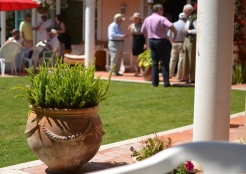 The 2014 visit was very well supported with not only 5 couples from Pendle Lodge but also Mike and Sue Squires from Colne Lodge making the journey, so well was the week-long festive package sold by John Hudson.

Our WM Ian Salthouse and Kath made the journey for the first time and were not disappointing. The Hotel and facilities had changed little since last year and we felt very much at home on arrival. It’s amazing how a strong dose of sunshine perks up everyone’s spirits. 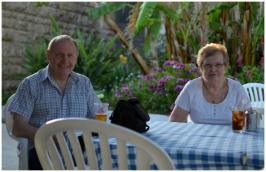 The first gathering of the program was arranged around the poolside bar where everyone had the chance to rekindle old friendships and make new ones. Plenty of Portuguese wine flowed and along with a barbecue we even had freshly made Lincolnshire Sausages.   Nobody fell into the pool, which by all accounts was pretty chilly. Jacqueline found this out to her peril when a few days later she succumbed to the hot sunshine and jumped in to cool down. 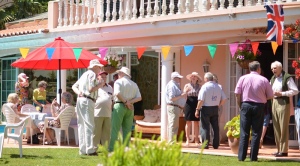 Sunday 18th saw us gathered at Larry’s Home in Cascaise for a typical English garden party. Larry has a beautiful home overlooking the town and he and his wife Christine made everyone welcome. To keep within tradition we had cucumber sandwiches along with scones and clotted cream, but it all went astray when a huge bowl of trifle appeared, nobody seemed to be concerned as it was rather good. The purpose of the trip this year was in support of the Model T Ford run from Cascaise in Portugal to Lincoln UK in aid of Prostate Cancer Care, with this in mind Larry started up one of his Model T Fords from the garage and offered rides back to the hotel for those prepared to make a donation. Surprisingly almost everybody wanted a ride, and I must admit it was a rare treat to cover the three or four miles back to the Hotel in such style. Larry reported the following day that he had received over 140 Euros in donations. 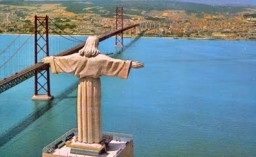 One of the pinnacles of the week was the Grand Tour of which many of the UK visitors took part. It was an amazing day and the views of the bridge in Lisbon, which incidentally is a cut down version of the Golden Gate Bridge at San Fransisco, and the National Sanctuary of Christ the King where breathtaking.

The week passed quickly with the weather being mostly kind to us. The ladies enjoyed their shopping around the new malls and the local markets whilst the boys mostly enjoyed watching the world go by at Jim’s Bar. 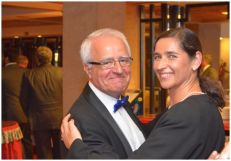 Lancaster Lodge Ladies Evening was a lovely night, the room was set out very well and the gentleman had all been issued with light blue craft ties to match. There are lots of pictures from the evening and they will appear here as soon as they are processed. Watch out for them.

We said our goodbyes to Larry, Dimas and Richard on Wednesday morning. Larry had arranged a charity run in aid of Prostate Cancer Care UK in one of his Model T Fords. The idea is to run from Lisbon right over to Lincoln in the UK to try to raise £10,000.00 for the cause. He was confident the car would make the trip and even planned several reception stops along the route for donations and press opportunities. There was even a stop over at Grand Lodge on Great Queens Street London to meet the Deputy Grand Master.

The week ended all to soon and an early morning breakfast found us all back at the airport with fond memories and plans to return in 2015.