Once again we made use of the large tracing board set from within Colne Masonic Hall and W.Bro Roy Langtree delivered the explanation with his usual comfortable style from the centre of the carpet.

Bro Smith listened to what was being said and made note of the several items pointed out to him. Since his passing ceremony Ritchie had managed to get to grips with the signs of the second degree and gave them to W.Bro Roy Langtree in a satisfactory manner.

The Lodge business went smoothly and the ballot for our next candidate proved successful. He will be joining us next month in April. In reality next month is when the real masonic work for the 2015 season starts in earnest. The honeymoon period is over and several ceremonies are 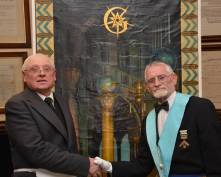 planned before the next installation in November. There are potentially two new candidates and a joining Brother, but I suspect the current team of officers already know their workload and are studying the ritual with gusto. It should be a good year for Pendle Lodge.

The evening ended early so a few swift ones were had downstairs in the bar area. Another enjoyable evening had by all.