Queens Jubilee Lodge meetings are always a happy affair and February meeting was just that. The main business of the evening was an explanation of the second-degree tracing board, to be presented by the WM Bro John Smith. Numbers on this occasion were a little lower than usual due to several members attending other masonic events in their roles as senior officers. 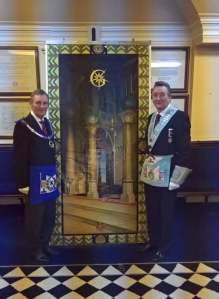 Bob Heap, custodian of the Royal Lancashire archive arranged for the large tracing board to be available, which added tremendously to the performance. Bob gave a brief explanation of the history of the hand painted boards and an introduction to the member who painted them in the 1930s/40s.

The Lodge was opened in the second degree and John Smith commenced his explanation of the Tracing board. It was a superb rendition, delivered in such a relaxed manner you would have thought he was telling a story, which of course in some way he was. The long version goes into more depth and explains the relationship between the war mongering Kingdoms and the battles and victories therein. It really was an enjoyable performance.

The social board was made up of a small number of dinners but all had a good time, the measure of a successful meeting isn’t about numbers attending but how happy the brethren are when they go home. Highly recommend a visit to Queens Jubilee Lodge if you get the chance.

One thought on “APGM enjoys tracing board the long way.”